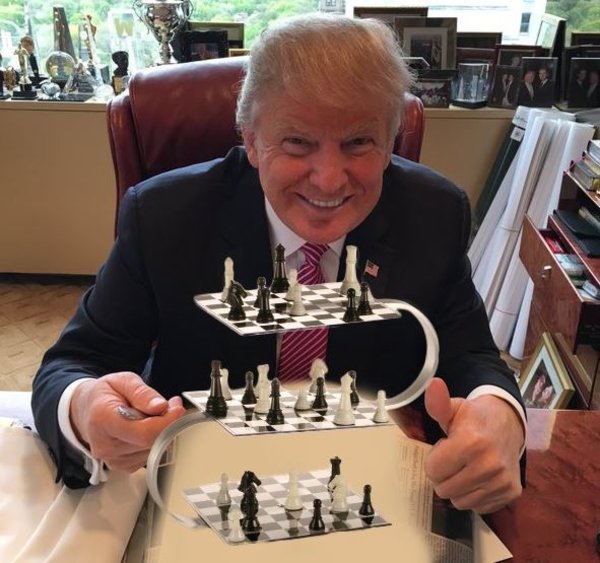 When the Mueller Report was released on April 18th, most commentators focused on the “explosive” factual allegations… At the end of Volume II of the Mueller Report, however, there were 20 pages of genuinely new material.

There, the former FBI director turned Special Counsel Robert Mueller defended his “Application of Obstruction-Of-Justice Statutes To The President.” These overlooked 20 pages were dedicated to defending Mueller’s interpretation of a single subsection of a single obstruction-of-justice statute: 18 U.S.C. § 1512(c)(2).

That’s quite strange, but you know what’s stranger still?

In June 2018 (a year before), Bill Barr, then in private practice…, wrote a detailed legal memorandum to Deputy Attorney General Rod Rosenstein… The subject was Mueller’s interpretation of the aforementioned 18 U.S.C. § 1512(c)(2)…

Why was AG Jeff Sessions asked for his resignation the day after the midterms?

Why was Bill Barr the only name ever seriously floated for AG?

And is it merely a coincidence that six weeks after Barr’s confirmation, the Mueller probe came to an end…?

This is a story about a legal chess match played for the highest stakes imaginable: Trump’s Presidency…

Because most of the obstruction statutes couldn’t possibly apply to President Trump’s behavior, as they require that a defendant obstruct a “pending proceeding” before an agency or tribunal.

It is settled law that an FBI investigation does not constitute such a proceeding. But § 1512(c) applies to acts of obstruction done with the intent of impairing evidence for a future, potential proceeding. That made it potentially usable (by Mueller) against the President… If taken to its extreme, it could be read to cover any act – no matter how lawful – that has the effect of impeding a federal investigation…

Conversely, in Barr’s reading… (the) subsection is a “residual clause” – a catch-all clause… Because subsection (c)(1) deals with types of obstruction that impair evidence, Barr argues, subsection (c)(2) has to be read narrowly, as limited to obstructive acts “that impair the integrity or availability of evidence.”

For our purposes, it is enough to understand this:

Mueller adopted an expansive, acontextual, and constitutionally questionable interpretation of § 1512(c)(2) and used it to justify an extensive investigation into potential obstruction of justice by President Trump.

Barr’s interpretation of § 1512(c)(2) – which was far more textually and constitutionally sound – would have made it almost impossible for Mueller to justify investigating Trump for obstruction of justice.

Very shortly after the Mueller investigation began…, Trump’s legal team had reviewed the evidence, realized there was no collusion between the Trump campaign and Russia, and believed that Mueller would come to the same conclusion, quickly… On January 8, 2018, the Mueller team requested an interview with President Trump about a wide array of subjects…

These questions were tells.

None of these questions related to possible collusion by the Trump campaign with the Russian government. They were all clearly targeted at potential obstruction by the President…

On January 29, 2018, Dowd and Sekulow fired back with a confidential letter to the Special Counsel…, they declined Mueller’s request for an interview, and pushed back on a potential obstruction theory…

Clearly, though, Mueller was undeterred by the Trump team’s legal argument…

But if Trump’s legal team couldn’t persuade Mueller to let go of his obstruction theory, the investigation could go on indefinitely… Dowd and Sekulow needed to come up with an answer.

(Thus my first novel thesis) is that Trump’s legal team sought out Bill Barr… and asked him to write the memorandum to Rosenstein.

Why would Trump’s lawyers want Barr to do this…?

Going over Mueller’s head to Rosenstein was the obvious move. If they could persuade Rosenstein that the legal theory underlying the entire obstruction investigation was unsound, Rosenstein might finally clamp down on Mueller, and the probe might come to an end.

Why Barr…? If Trump’s team were looking for someone with the prestige and gravitas to persuade Rod Rosenstein, they couldn’t have found anyone better than Bill Barr…

Whether or not this theory about the impetus for Barr’s memo is right, the memo itself ultimately did not have the desired effect. Rosenstein did not intervene in the Mueller investigation…

The day after the midterms, Jeff Sessions was asked for his resignation. Less than a month later, Bill Barr was nominated as his replacement… No other candidate was ever seriously floated.

That leads to my second novel thesis: After it became clear that Rosenstein was not persuaded by the Barr memorandum, Dowd and Sekulow persuaded President Trump to fire Sessions and make Barr the Attorney General…

The problem for Trump’s lawyers is that Rosenstein had either adopted Mueller’s obstruction theory, or was letting him run wild with it despite his reservations. But who decides what the Department of Justice’s position on the proper interpretation of a criminal statute is? Usually, the attorney general would decide. In this case, however, it was the Deputy Attorney General, since Sessions was recused.

But what if Sessions wasn’t the Attorney General?

The timeframe is key here. Anthony Kennedy announced his retirement in late June.
If Trump’s legal team thought that Sessions needed to go, they probably would have been reluctant to advise Trump to fire him right away, with a bruising Supreme Court confirmation battle coming up, followed by the midterm elections.

Instead, one suspects that Trump and his team decided to focus on getting their Supreme Court Justice confirmed, and to hold off on firing Sessions until after the midterms…

Barr was eminently confirmable…, but more importantly…, Barr’s confirmation would change the Department of Justice’s official view on the interpretation of § 1512(c)(2) – and thus undermine Mueller’s obstruction investigation.

When the June 2018 Barr memorandum became public in December, many Democrats tried to weaponize it against him. But because Barr’s memo was specific to a particular statute, and was perfectly defensible legal analysis, it was hard for the Democrats to get any traction.

In hindsight, however, it’s clear that Barr was the assassin Democrats feared.

Within six weeks of his confirmation, the Mueller probe was over.

When Mueller equivocated on obstruction in his report, Barr affirmatively determined that there was no viable obstruction charge. In a twist, Barr didn’t rely on a narrow reading of § 1512(c)(2); instead, he exploited the malleability of Mueller’s theory and determined that Trump lacked the requisite intent to commit obstruction.

At the same time, he made clear during the press conference that he didn’t agree with Mueller’s legal theories…

In any event, Mueller and Weissman had lost the chess match. Trump and his team had won.

No Collusion. No Obstruction. No more Mueller Investigation.

*************
My apologies for my extended absence. My aged Mother suffered a stroke at the end of March, and passed away on April the 16th. The resultant events and legal ramifications have served as necessary distractions from TPT.

But it was time to wet my feet again, and this was a worthy, though lengthy, essay.

As usual, Trump is WINNING!