It wasn’t bad enough that the FBI under Robert Mueller’s leadership shut down its investigation of stolen U.S. STEALTH defense technology to protect Lockheed Martin while James Comey was Lockheed’s top lawyer.

The FBI next did the unthinkable: Lied to Congressional investigators. And lied big.

For nearly four years the FBI investigated the international theft of STEALTH defense technology from a small Florida marine company that invented an ingenious way to help protect Navy ships and nuclear ballistic submarines from being detected on enemy radar and sonar.

And on the eve before the case was to go to a Grand Jury, the case was closed by then-FBI Director Mueller and then-Attorney General Eric Holder.

After the FBI walked away from the case, Congressional investigators took over and began probing the technology and trade-secret theft from the small Florida company by multi-billion dollar defense conglomerates.

Congress put the case on hold, awaiting a green light from the FBI. But that light never came.

But, records and testimony show the FBI never lifted a finger to reopen the case and it’s representations to Congress that the case was active turned out to be nothing more than a charade to close the Congressional inquiry.

One big lie. A classic Mueller move. And a hallmark of Holder’s political career as well. Two investigations snuffed out for the price of one.

And who benefited? Lockheed Martin and its lead counsel Comey who left the Justice Department to work for the defense contractor.

“This was the original pay-to-play scheme and it involves Mueller, Holder, (James) Comey and (Hillary) Clinton,” said Steve Morton, inventor and owner of a rare robotic ship and submarine stealth painting technology that can help make the U.S. Navy’s fleet invisible on radar and sonar. “They allowed my technology to be stolen by European companies partnered with Lockheed Martin and Comey was the top lawyer for Lockheed.

Now my technology is being sold to the Chinese, Russians, and all over the world to enemies of the United States. I wonder how much Hillary Clinton made on this because she was Secretary of State when the probe was shut down.”

Let’s take a step back to the beginning of this David vs. Goliath story that is producing massive allegations and disturbing revelations against familiar players linked to numerous other FBI, DOJ and government scandals. But this time the stakes are much larger than a Uranium One scandal. That was millions. This is untold billions.

And Morton should know. He worked as the FBI’s undercover informant on the case for almost four years, wearing a wire. Recording phone calls. Gathering evidence against Fincantieri, the massive Italian shipbuilder who the FBI had all but proven swiped Morton’s Stealth painting technology as well as his company’s computer files.

Comey had left the Justice Department in 2005 to become Lockheed Martin’s top lawyer until 2010,  the exact time frame his client was under investigation along with its Italian shipbuilding partner.

Morton and high-ranking FBI sources said Mueller had received pressure from Comey, Lockheed’s high-priced general counsel to squash the case. And then suddenly almost four years of FBI casework spiraled down the drain. Mueller and Holder shut the entire case down.

Fincantieri and Lockheed Martin are partners in the shipbuilding business for the U.S. Navy and navies in several countries. Heavy partners with billions of U.S. tax dollars alone pouring into the coffers of both massive corporations. In fact, when it comes to building warships and outfitting them for combat, Lockheed is under an exclusive contract with Fincantieri.

South Florida entrepreneur Morton, however, describes Fincantieri as a greedy foreign defense contractor who conspired with Lockheed to steal his technology and run him out of business. The most important vessel in the US Navy, as far as a weapon platform, is the nuclear ballistic submarine. It’s common knowledge in the Department of Defense that these submarines have active defense technology such as anti-submarine torpedoes, but the PRIMARY defense of any submarine is STEALTH. Keeping it hidden from enemy sonar.

Fincantieri rakes in $5 Billion annually, while Morton is asking family and friends for loans to help pay his legal fees. And that annual revenue for Fincantieri doesn’t include its numerous spinoffs and subsidiaries that are too vast to list here.

This is a case and a story of the prophetic David vs Goliath.

But in this case, David turned to the FBI to try and take down this gargantuan defense contractor — partnered with Lockheed. And things appeared to be going well until Goliath produced attorney James Comey who was old friends with FBI Director Mueller.

“These bastards took everything I had,” Morton said. “And our ships in the Navy still aren’t protected by this technology, while our enemies are protected with it. This is a national disgrace.”

Morton was not the only person angered by the abrupt end of the FBI’s probe into the defense contractors. In 2011, then-Congressman Allen West got involved, trying to nail down why the FBI walked away from a case it had built for almost three years.

“The Federal Bureau of Investigation was investigating this case, (DOJ case number 288A-MM-109951) before Attorney General Eric Holder asked them to end the investigation,” West wrote to House Oversight Committee Chair Darrell Issa. “I am not sure why the Department of Justice would back off a case regarding the theft of US defense technology.”

The correspondences that ensued between the Congressman prompted Issa to jump on the case which set off a rash of FBI and DOJ lies that stretched from Florida to Washington D.C. to Italy and beyond.

But for a small fish like Morton, up against conglomerate defense sharks, he had little chance.

Especially when the Justice Department rigged the cases to ensure he was left almost financially broke and emotionally drained.

The inscription on the Statue of Liberty, in part, reads: “Give us your tired, your poor, Your huddled masses yearning to breathe free …”

Who could have ever imagined those words would one day — today — describe the plight of law-abiding American citizens. And their frustrations with corruption in this country by the same repeat offenders who always seem to get away with it — at the expense of the Steve Mortons of the world.

Following is a letter from Rep. Allen B. West to Darrell Issa, Chairman of the Committee on Oversight and Government Reform: 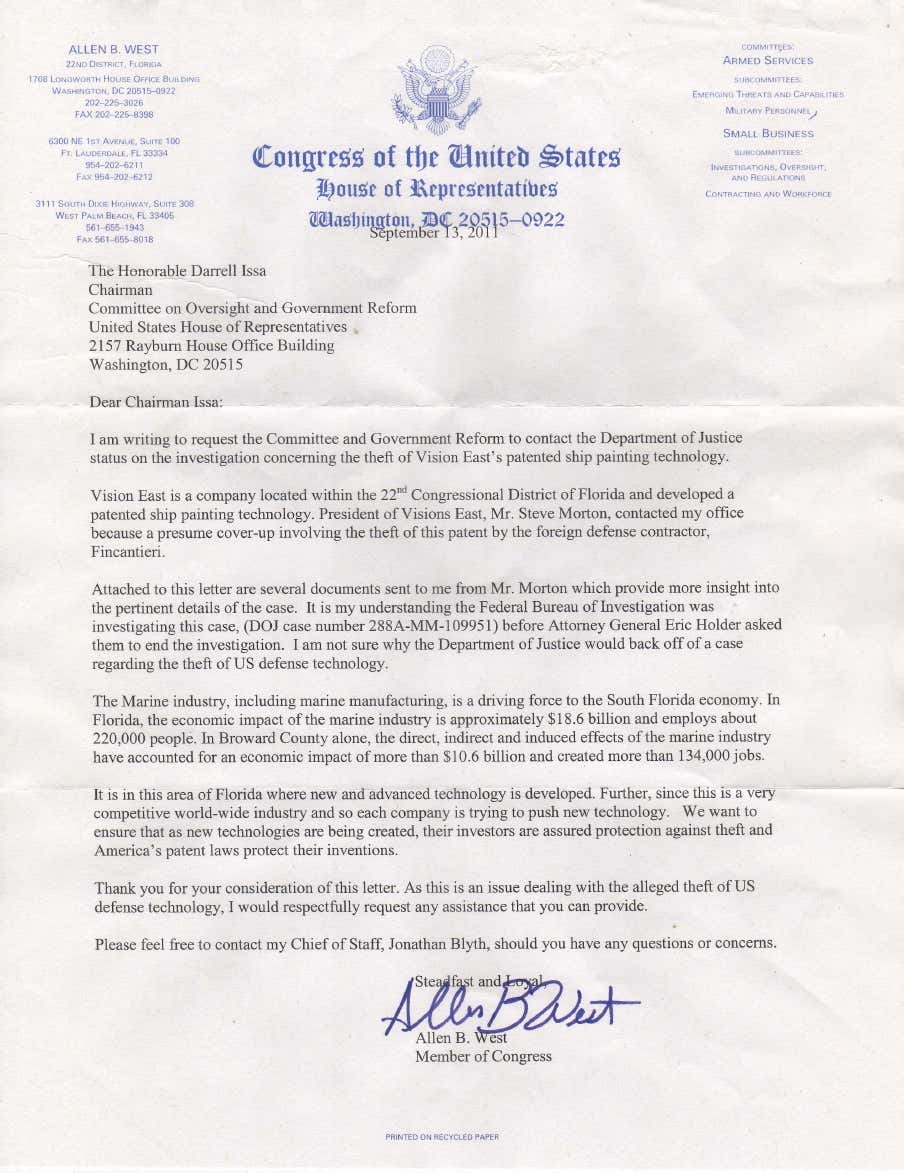 Almost daily – certainly weekly – we’re constantly bombarded with more new evidence that the upper crust of our vaunted FBI and DOJ have not only committed criminal acts, but they’ve also been complicit with others in conspiracies to defraud the country’s secret technologies. Yes, they’ve conspired to help one another reap mega-rewards derived from their prior positions as ‘civil servants.’ These people who have been, on occasion, described as selfless servants of the people, apparently looked at their DOJ and FBI jobs as giving them immunity from our laws. Many of them are the very same criminals who committed fraud to exonerate Hillary Clinton and frame Donald Trump.

Perhaps the most disturbing aspect of this wholesale exposure of criminal acts by our top agency heads is that were it not for Donald Trump’s election, we’d still be in the dark about their activities that could have continued for decades to come – who would have stopped them?

IF we are still to be a nation of laws, and IF there is any justice remaining in our justice system, ALL of these miscreants must pay dearly for their crimes against the Constitution and the American people.