For years, the Dems have used hate speech to target conservatives, and it’s worked really well…at keeping their own voters in line. But today, not so much.

They see Trump laugh at their insults and walk away, usually followed by doing something else good for Americans. The minority groups who used to be under the Dem control are starting to drift away. They’re tired of the constant beratements full of hatred and violence. They’re finally realizing Trump isn’t the monster the Dems made him out to be.

A new grassroots movement is underway and started, in part, with a video posted by Brandon Straka, a gay man from Nebraska, who says he is one of the liberals who melted down in November of 2016 after Trump was elected.

“It’s funny now, but at the time it was completely tragic,” he told conservative podcaster David J. Harris in a recent interview. “I was like a heartbeat away from being that ‘Leave Britney alone!’ guy. crying hysterically,” he said.  Straka told Harris that a string of emotional videos he made after the election are still up on his Facebook page. He said the reason he was so devastated was because he believed all of the media lies about Trump being a “racist, bigot, sexist, homophobe, sexual predator.”

The #WalkAway campaign is “dedicated to sharing the stories of people who can no longer accept the current ideology of liberalism and what the Democratic Party has become,” the group’s Facebook page states.

“Some left long ago. Many of us have recently been “red-pilled”. Some here have wanted to leave for some time, but feared the consequences they might suffer from friends or family if they walk away.

This group is here to encourage and support those on the left to walk away from the divisive tenets by allowing people to share their stories, or watch the video testimonies and read the posts of others who have walked away.”

Lea Anna Bright, in a mohawk, looks into the camera and says in a slow, simmering voice: “This is a Vice article I am reading right now. It says, ‘The activist left doesn’t give a shit about your calls for civility. Get ready for a summer of rage.’” She looks up. “This is where the party is going, and this is why I chose to walk away. Peace. Not for me. Bye.”

That’s 6,000 members who have had a change in heart about their politics, and again, they’re not the only ones. Dianny at Conservative Retort said that he walked away 15 years ago, before walking away was cool. And others have said: 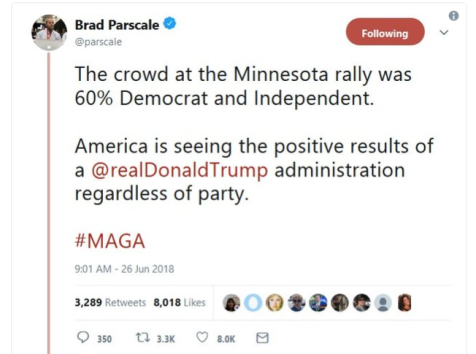 There are plenty more, but you get the idea. People are finally realizing that all the lies the Dems told over the decades about fighting for the working class” were just a bunch of lies.

What Dems don’t understand is that embracing socialism, hating America and attacking American people isn’t a winning strategy – it’s suicidal and the voters don’t want to go with them. Meanwhile, the Dems’ response is screeching anger, violent rhetoric, and if you don’t agree, then you’re a Nazi.

After Kanye West tweeted his approval of Candace Owens’ video, approval of Trump among black men rose 22%. According to a June Rasmussen poll, twice as many black voters will now admit they are better off under President Trump.

Liberals, get off the Dem train – you don’t want to go where they’re going. Just walk away.