The reality of Chicago’s murder rate 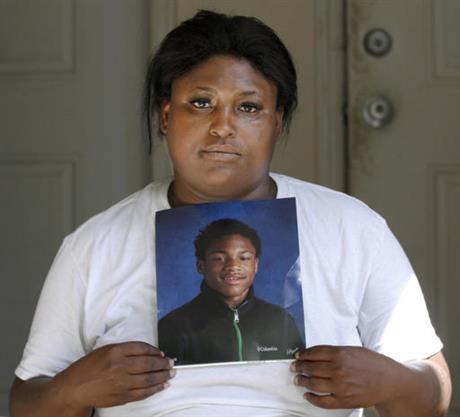 Monique Causey and a picture of Malik.

Political correctness is lethal, and the killing fields of Chicago provide ample evidence to those willing to look at it with clear eyes.

The Associated Press manages to provide some surprisingly frank details on the real nature of the outbreak of murder in Chicago, a phenomenon that has become a worldwide emblem of the violence depravity of American society, in the eyes of America-haters.  In a piece titled “Why is Chicago a murder capital? Clues from a bloody month,” Don Babwin lays out clearly specific subculture that is responsible for the murders:

To those outside Chicago, the rising murder toll might suggest a city wracked by widespread violence, but August portrays a much narrower picture of constant tit-for-tat attacks among gang members, with bystanders sometimes caught in the crossfire.

Babwin lets the subculture reveal itself through interviews.

Fourteen-year-old Malik Causey loved the way gangs took what they wanted from people on the street, the way members fought for each other, the way they could turn drugs into cash and cash into $400 jeans.

His mother tried to stop him. She yanked him out of houses where he didn’t belong. She cooked up a story about Malik punching her so the police would lock him up to keep him safe for a while.

Then on Aug. 21, Monique Causey woke to discover that her son had sneaked out of the house. Before she could find him, someone ended his life with a bullet to the back of his head a few blocks away.

“I went to him and cried and told him he wouldn’t make it,” Causey said. “But this fighting, jumping on people … this is all fun for them. This is what they like to do, you know, so how can you stop them?”

This is utterly horrifying and heartbreaking.  A mother is powerless to save her son from the allure of a street culture that proved irresistible.  The drug trade offers quick money, and the macho aggressiveness necessary to defend drug-dealing turf leads to the tit-for-tat of murder.

“People are arguing on Facebook over the color of some girl’s hair, real simple things … and they carry guns and when they finally catch each other, that’s how it be,” said Derrick House, 51, a former gang member and ex-convict who now works trying to prevent violence. “When they see the person they looking for, they don’t care who else is out there, old people and kids, they just start shooting.”

This subculture’s membership is well known to police:

… more than 70 percent of those shot to death appeared on the Chicago police’s “Strategic Subject List,” which includes 1,400 people considered likely targets of violence based on gang involvement or criminal record.

The real question then becomes how to destroy this subculture.  The Constitution rules out simple but drastic measures, and left-wing legal groups are anxious to push theories like disparate impact to prevent reasonable approaches surviving litigation.  Cops can convict some of the murderers, but incarceration is hardly a scary deterrent when murder is so common a fate.

The real leverage point for change would be the broader culture.  These kids have their minds filled with glamorous imagery and music glorifying gangsta life.  But getting the producers of this material to stop is fruitless.  Instead, we need to start mocking the gangsters as dummies, too stupid to realize they are throwing everything away.  Stop treating them as victims, and let the rest of humanity scorn their subculture as uncool.  Of course, it is taboo for whites to scorn anything associated with any blacks.  But is this taboo worth preserving when it is killing thousands of young African-American males?

The one thing adolescents can’t stand is shaming as uncool.  It is time to let the natural human revulsion at this barbarity be expressed instead of repressed by political correctness.

Or you can just call me a racist and move along.

Why won’t they do it? Because it won’t be easy, and that’s reason enough for them to ignore the problem. Democrats have no stomach for difficult jobs, they’d prefer to continue to wail and lament the “senseless deaths” committed by those pesky guns and try to prevent law-abiding citizens from having them. Think about it – they’re cowardly and afraid to remove the guns from Chicago teens, but they want voters to continue to elect more democrats to “lead” the country.

Lead the country? That’s a laugh! Democrats simply haven’t demonstrated that they have the cojones to do anything difficult, their solution is either ignore it or blame it on someone else.

Like Loading...
‹ DHS Says Refugees Are Allowed Into U.S. Based Only on Their Testimony
Judge Tells Court He Would Dump All Guns in the Ocean ›