Home › Political › How the RNC has screwed us all, but Milo spills the beans

How the RNC has screwed us all, but Milo spills the beans

I was off today and didn’t have any pressing chores, so just before noon, I decided to walk down to my local Subway and grab a sandwich. I’d just stepped out onto the front porch when I noticed Milo sitting on his porch cleaning a revolver.

He’s a retired guy who bought the house next door about a year ago. He’s a real hardcore conservative, and he seems well informed so we often talk about guns or politics and about how the country is going down the crapper – we do it once or twice a week.

Milo reminds me of Clint Eastwood (even looks like him) in his Gran Torino and Dirty Harry roles. Milo’s pea-shooter is even “the most powerful handgun in the world,” an S&W model 29 .44 magnum.

I was standing in my driveway, Milo still on his porch while we talked, mostly bitching about Obama and his latest lies and generally complaining about how useless the RINOs in D.C. were.

After a few minutes, he paused and looked around (like he was making sure that no one was listening in), and motioned for me to come closer. Almost whispering, he asked, “Did’ja hear about why the Republican’t party can’t challenge the democrat’s voting fraud? He always called them the Republican’ts, he said it was a tribute to their legendary lack of leadership.”

I didn’t have a clue what he was talking about, so I replied “no, why.”

“Oh, you haven’t heard about that? Well, c’mon up to the porch and sit a spell. How ‘bout a cold beer?”

I weighed having to listen to Milo go on about how things were so much better in the 50’s when he was young against a free cold beer. The beer won, so I accepted – I had a little time to kill – might as well listen.

“No, I was only five then … and what’s a consent decree?”

“Well, my young friend, that’s when the RNC pulled some real stupid tricks in New Jersey and got caught with their pants down and got sued by the democrats. I guess they were losing in court ‘cause they settled the case by agreeing to sign that consent decree.”

“Ok, so there were dirty tricks, but what’s the consent decree and why is it a problem?”

“Because the dumbass Republican’ts agreed to limit their ability to fight voter fraud in minority districts, and not just in New Jersey, but in the entire country. And that’s not even the worst part – they didn’t even put a time limit on it – the limitation could go on forever.”

I didn’t really believe it when he told me how the RNC had not only shot itself in the foot, but also in the ankle, shin, thigh and would have hit itself in the balls, but those had shriveled up long ago.

Leave it to the Republican leadership; it takes a real commitment to do something really stupid over and over until you achieve perfection. But according to Milo, the RNC has achieved perfection in stupidity. They’re like the Lexus of political parties; they’re relentless in their pursuit of perfection in committing political suicide.

“The democrats did all they could to register voters, dead or alive, two or four legs, as long as they voted for democrats. The Republicans, thought that they’d fight the dem’s bogus votes by creating programs to slow or stop some minorities (at least the dead ones) from voting – and they got caught.”

“What did they get caught doing?”

“They got caught doin’ what’s called ‘voter caging.’ What they did was send mail to addresses on the voter rolls and when some of the mail came back as ‘undeliverable,’ they made a list of those voters. Then, they used that list to purge or challenge voter registrations on the grounds that any ‘undelivered’ voter didn’t legally live at the address listed on the voter rolls.”

“And what’s wrong with that? Isn’t it the voter’s responsibility to keep their voting records up-to-date when they move?”

“Well, the dumbasses just did it in minority districts, not everywhere, and when the DNC found out about it they sued the RNC for discrimination. The RNC must’ve believed that they’d lose and be hit with some pretty tough sanctions so they signed the Consent Decree.”

“And it’s still in force? Even today?”

“Yep, in fact the Republican’ts have tried to get the Consent Decree thrown out a bunch of times, but the dems outwit them, or they outwit themselves every time and just keep losing.”

“And if that wasn’t enough, the Carter appointee judge who signed the original agreement has long since retired, but every single year comes back just so he can renew the order for another year.”

“Get this, in 1986 they tried that same caging process again, got caught again and even worse, this time, during discovery, the RNC gave the DNC a copy of a memo between two Republican political directors talking about how using that caging program could eliminate 60-80,000 folks from the rolls. And, he said, it could keep the black vote down by thousands.”

“That memo, Sonny, is an example of the smokin’ gun the RNC keeps shooting itself with.”

“So, the DNC filed suit again, and the RNC agreed (again) to a modified version of the Consent Decree that ‘clarified’ ballot security. So now it prohibits just about anything that the Republican’ts could do to prevent or remedy voter fraud. It’s all prohibited.”

“And on top of that, the Republican’ts have to get advance approval from the court and the DNC before they even try any new voter fraud activities.”

“Sounds like the democrats have themselves a sweet deal – they can’t lose.”

“Ahh now you’re beginning to see why I’m always so pissed at the Republican’ts. Through their dumbassedness (is that a word?), they’ve managed to snatch defeat from the jaws of victory and they keep doin’ it over and over.”

“In fact, I’ll bet that there’s probably a voter caging operation goin’ on somewhere right now just waitin’ for the dems to catch it – they’ve been caught four more times since the original case.”

I’d listened to Milo for about 4 beers worth and had enough. I badly needed some Pepto to calm my stomach.

He gave me some links so I could check it out for myself. Later, I went to each one and, sad to say, he wasn’t lying.

It helps to explain how the 2012 election got turned from a likely Romney victory into a win for Obama. How else could 100 precincts in Ohio have 19,605 votes for Obama and zero for Romney? And what about the other precincts where Obama got 99 percent of the vote – how else does this happen, especially in a swing state?

Or another report out of St. Lucie county in Florida (another swing state), where they reported 247,713 votes cast when only 175,554 voters are registered (141.10% turnout). How did that happen? Was it a miracle? It seems like that should be evidence of voter fraud all by itself.

And we can’t even challenge them? It’s no wonder voter fraud is widespread, they aren’t worried about getting caught – who’s gonna catch them?

I know this is hard to believe. I didn’t believe it either. So, you need to see the evidence for yourself:

Here is just a taste of what you’ll see via the links. This is the original 1982 Consent Decree and a link to a Judicial Review article describing what happened: 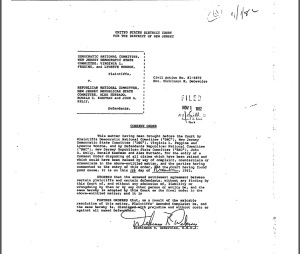 Want more evidence that the RNC really screwed up in their handling of the Consent Decree?

Following is the opinion of the 3rd circuit court in response to an RNC appeal in 2010. This is lifted from the actual court filing. Note the words the court used to chide the RNC for their idiotic handling of the Consent Decree, these are their words:

“The RNC asks that our Court vacate a decree that has as its central purpose preventing the intimidation and suppression of minority voters. When, as here, a party voluntarily enters into a consent decree not once, but twice, and  then  waits  over  a  quarter  of  a  century  before  filing  a motion to vacate or modify  the decree, such action gives us pause. Further, the RNC, with the advice of counsel, twice chose to limit indefinitely its ability to engage in certain activities enumerated in the Decree by entering into a decree with no expiration date.”

Beginning to see how the RNC let all Republican voters down? By their really stupid activities and bonehead legal pleadings, they’ve insured that voter fraud will continue to help elect democrats while at the same time, legally prevent any related group from doing anything about it.

The important point is …

WHY HAS THE REPUBLICAN LEADERSHIP KEPT THIS CONSENT DECREE SECRET? WHY IS IT PRACTICALLY UNKNOWN?

That’s actually a rhetorical question – we know why.

If Republican voters knew that the party’s “leadership” has crippled our ability to combat democrat voter fraud – voluntarily – the contributions would dry up. Period.

Here are links to more real evidence – from the actual court documents. PLEASE READ THEM and form your own conclusions.

This is not the end. We are only beginning to shine the light on this formerly secretive issue. Hardnox, the keeper of the archives for this subject, has lots more. We will continue to expose more about the RNC’s fumbling to our readers in the coming months as we approach the 2014 mid-term elections.

You might jump over to ‘Nox & Friends for more reporting on this issue.

Big H/T to Hardnox for enlightening me about this serious subject.